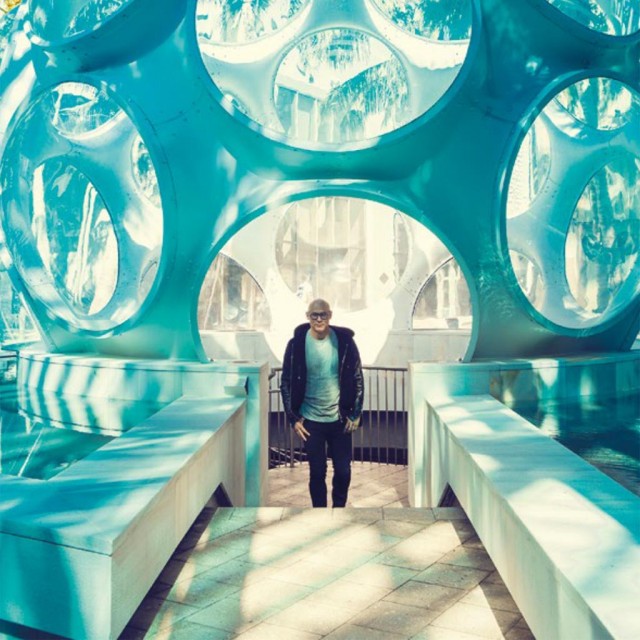 With an increasing number of celebrities moving to the city, Miami is becoming a major hot spot for who’s who in fashion, design, and art.

Models Adriana Lima and Karolina Kurkova, entrepreneurs Camila Coelho, Mario Carbone, and Masoud and Shojaee, as well as Martha Graeff and Rony Seikaly have all found a place in the sun, for both professional endeavors and personal enjoyment, in Miami. The idyllic surroundings – cue palm trees and the ocean backdrop – combined with a relaxed yet dynamic vibe are clues to what makes the city so attractive. Yet there is much more than that. For the past few years – and at an accelerated pace during recent months – Miami has been experiencing a true renaissance. Some people, like businessman, investor, and philanthropist Craig Robins, have been instrumental in the phenomenon that is transforming the Florida metropolis into a hub not only for business and entertainment but also for the artistic world.

“Incredibly talented and dynamic people are moving here every day and relocating their companies,” notes Robins. The CEO and founder of real estate development firm Dacra (which creates communities where art, design, and architecture enrich urban life) is one of the minds behind the repositioning and revitalization of Miami’s South Beach that started in the early 1990s. Among his main realizations are the restoration of several art deco landmarks as well as the development of mixed-use projects such as Lincoln Road and Española Way, the residential community Aqua at Allison Island, and a complete neighborhood called the Miami Design District, which proved to be extremely successful, with more than 170 luxury shops. “One of the most defining moments was when LVMH moved all its major stores to the Design District, quickly making South Florida a fashion capital for the US,” says Stephanie Shojaee, chief marketing officer of real estate developers Shoma Group, which was founded by her Iranian husband, Masoud. “In the last few years, high fashion and jewelry shows and events have started to take place, including Dior Men’s FW20 collection and Louis Vuitton men’s SS22, Virgil Abloh’s last collection.” The busy couple, who lives and works in the serene area of Coral Gables, has several projects in the pipeline, including condominium Ten30 on Miami Beach, food hall Shoma Bazaar, and several multifamily developments. In the Design District, eye-catching buildings, including the Buckminster Fuller Fly’s Eye Dome, add even more interest to the mix. Nestled inside the historical 1921 Moore Building, public installation Elastika represents the legacy of Zaha Hadid, who spent her last years in the city where she also designed high-rise residential condominium One Thousand Museum in Downtown Miami. This art piece was launched for the 2005 inaugural edition of Design Miami – cofounded by Robins – which occurs annually and is now the definitive experience for the global design community, in parallel to Art Basel, which attracted 60 000 collectors, visitors, and institutions from 72 countries last December. The Institute of Contemporary Art, Miami, Museum Garage, and the de la Cruz Collection (owned by businessman Carlos de la Cruz and his wife Rosa) contribute to the vitality of the art sector.

“Every year, I host an event called the Bazaar for Good in the Design District, raising funds for various global children’s causes,” says Brazilian-American influencer Martha Graeff, who shares her life with Lebanese-American former professional basketball player turned DJ Rony Seikaly. “It attracts some of the coolest people of Miami.” The next edition will take place on May 5. “Miami is living its best moment right now,” adds Seikaly. “You can see a clear change in the energy of the people and the amount of new businesses opening up. It’s a great time to  be here.”

Since the opening of L’Atelier de Joel Robuchon in 2019 and the reopening of Michael’s Genuine in December 2021, the culinary scene has been thriving, too. Mario Carbone, founder of Major Food Group, is a name to follow. He has 27 acclaimed restaurants around the world, inaugurating six of them last year in Miami (Carbone Miami, ZZ’s Club Miami, The Flamingo Grill Boca Raton, HaSalon Miami, Sadelle’s Boca Raton, and Sadelle’s Coconut Grove), with three more in the works. “There’s an innate sense of celebration in the air at all times, from the melting pot of cultures and people to the city’s own energetic spirit and enthusiastic growth,” says Carbone, who is currently preparing the launch of three additional establishments in Riyadh for 2022.

For Camila Coelho, the Brazilian founder of beauty brand Elaluz, which will soon expand to the Middle East, relocating from Los Angeles to Miami last year has proved to be her best move. “Miami has always had such a strong Latin feel and community, which makes it more fun for me and my husband,” she shares. “Miami feels like a combination of different industries, cultures and ideas. My favorite neighborhood is Coconut Grove. I love the peacocks that wander around; sometimes it feels like a little jungle.”

With its colorful murals, Wynwood is another must-visit area, which honors graffiti and street artists, while the financial center of Brickell and the upscale community of Bal Harbour also reflect their own atmosphere. “Right now, Miami is characterized by innovation, energy, and optimism – add in the natural beauty, and it’s a pretty intoxicating combination,” Robins says.

It seems that the city has it all and is still booming. In November last year, Louis Vuitton unveiled its first standalone men’s store in the US with a facade developed from the Diamond Screen pattern by the Marcel Wanders studio, while in December, Chanel unveiled its latest two-story boutique designed by star architect Peter Marino with an immersive, multisensory installation created by artist Es Devlin within Jungle Plaza to celebrate 100 years of Chanel No5. “I envision limitless possibilities for Miami,” says Robins. “We have a part to play in global conversations around how we live, work, grow, and create as a society, and I’m excited.”