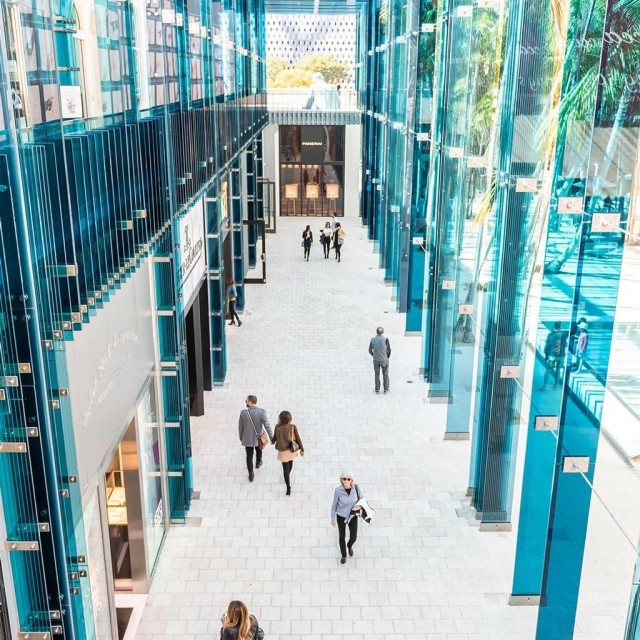 The first phase of retail reopenings following the coronavirus crisis in Miami-Dade County began on May 20, earlier than some other large American cities. Malls such as Aventura, and shopping neighborhoods like the Miami Design District continued to evolve with new store construction and expansions, which got a boost from Miami’s economy and new transplants who relocated there at the height of the pandemic.

“We’ve been actively signing leases and opening new tenants throughout the whole Covid-19 period,” said Jackie Soffer, co-chairman and CEO of Turnberry, which owns Aventura. “We have a lot of new stores, about 30 or so, some local, and some national. We’re different – I kind of like to treat the property as a town center. We’re a big part of the community.”

Soffer has been commissioning art for the shopping center for more than a decade and travels in an art world orbit with her husband, Craig Robins, who spearheaded the development of the Miami Design District. He’s the owner and principal of Miami Design District Associates, a partnership between Robins’ company, Dacra, and L Real Estate. He shows artists such as Louise Bourgeois and Gary Hume, while Aventura has a fountain created by the Haas Brothers and a giant experiential slide that’s a work of art by Carsten Holler.

During the pandemic, the 2.7 million-square-foot Aventura, pivoted with more restaurant seating outdoors. Its indoor farmer’s market moved outside with a drive-through format that helped local vendors to stay in business. Recently, Aventura expanded the market’s indoor footprint to feature more than 80 vendors every weekend. With temperatures rising, the market continues to expand with a goal of 100-plus vendors as visitors escape the heat inside the air-conditioned mall.

Aventura continues to evolve with the addition of chef-driven restaurants such as Michael Mina’s Estiatorio Ornos, Juan Chipoco’s Pollos & Jarras, and Guy Fieri’s Chicken Guy! The Sugar Factory is set to open this summer and many of the more than 40 restaurants and Treats Food Hall are offering both indoor and outdoor seating.

“It’s become very active,” Soffer said of Aventura. “People want to be out and about. We have a community here.

Robins and Soffer have a “friendly competition,” the latter said, adding a dig, “I used to go to the Design District on Saturdays and we were always busier than him.”

“The Design District has really reached the point where we’re clearly an epicenter for luxury retail and culture,” Robins countered. “During the pandemic, 12 tenants expanded, taking 50% or more space. We’ll be anchored by a new Chanel flagship, which will open in September.

“The pandemic was a struggle for all of us, but more people migrated to Miami and changed their habits,” Robins said. “Sales volume of most brands is ahead dramatically. We have six to seven more restaurants opening in the next 12 months and starting in November, we’ll have so many new stores. We’re positioned to continue to gain market share.”

The Design District is expanding on several fronts. In addition to the new stores and restaurants, Robins said a Class A office, club and hotel are part of the plan. “We’re looking at doing several large scale edition restaurants and hospitality,” he said. “Every category has grown, so you go to the next stage and add additional uses.”

The 1 million-square-foot Design District had serious protocols in place during the pandemic. Robins estimated that stores do sales per square foot in the $2,000 range, adding that the area is attracting much younger customers than ever before. Sales during the pandemic were up 20% to 30%, and are now ahead 95%, he said.

“With the Institute of Contemporary Art and the Della Cruz Museum, we have amazing art spaces,” Robins said. “L Catterton, our partner, wanted to make sure the neighborhood was about culture. The amount of social media generated by art is amazing – it’s the best photo studio.

“The Design District is this unique place in Miami where you can walk everywhere,” Robins said. “”L Catterton thought it was important to make it very accessible. It just happens to have these amazing luxury stores. The Design District is smaller than Aventura and more focused on luxury.”