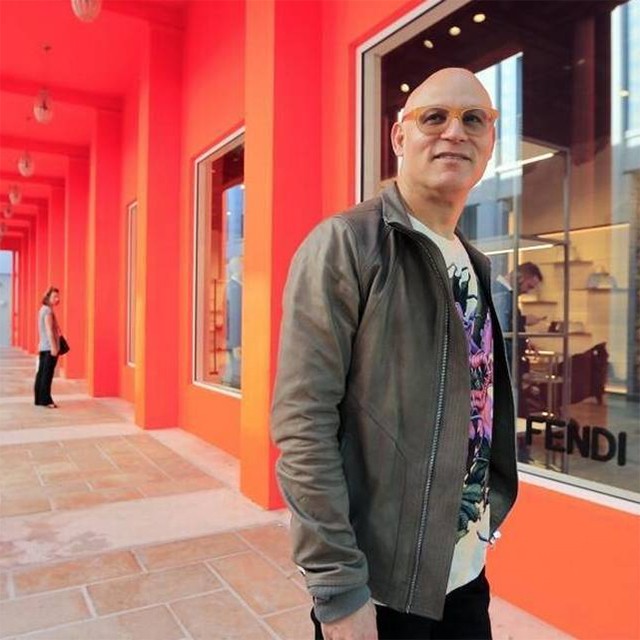 The construction, at last, is mostly finished.

Nearly 25 years after developer Craig Robins scooped up his first property in the then-blighted wholesale district geared to interior designers, the latest expansion of the $1.4 billion Miami Design District is almost complete.

The barricades and cement trucks that made Northeast First Avenue look like a war zone are gone. Long-blocked roadways have been cleared for traffic. So are new pedestrian walkways, art installations and plazas. In the Design District, he has preserved historic gems like the Moore Building, which was built in 1921, while mixing in new modernist buildings, spectacularly organic facades and art installations like a Buckminster Fuller-designed dome big enough to walk through.

Two free-to-the-public museums are open, along with new stores ranging from ultra-luxury (Gucci) to urban and hip (Rag & Bone). The high-end Cuban restaurant Estefan Kitchen has been cooking since March, serving up upscale black beans and ropa vieja with live music and open mic nights. The Nite Owl Theater has been screening cult and classic films since August.

More attractions are on the way, including four celebrity-chef restaurants and a crazy-photogenic seven-story parking garage featuring eyepopping facades by six different artists.

But despite attention from big-time media outlets including the New York Times and Vogue, tony soirees during Art Basel, weekly free concerts and monthly Family Day events, the Miami Design District remains a largely-unknown celebrity in its own hometown. The District spans 18 square city blocks north of downtown Miami, from NE 38th to 42nd Streets between N. Miami Ave. and Biscayne Blvd.

“There's a challenge in getting the word out about what you’re doing,” said Robins, CEO and president of Dacra development, which currently owns 900,000 square feet of property in the 25-acre Design District. “We could have bought a million ads and said ‘We're the Design District!’ in flashing lights. But the Design District is about authenticity. You have to continue being what you are and hope that over time, it attracts more and more people. We’re putting signals out to draw you in, but you have to come and discover it on your own.”

Over the Presidents’ Day weekend, the District is sending out a giant beacon with the first Watches & Wonders fair ever held in the U.S. The event, which runs Feb. 16-19, features exhibits by 21 of the world’s top watchmakers showing off their latest models, a series of lectures and seminars for watch hobbyists and collectors, kid-friendly activities and timepiece-themed virtual reality and film installations.

Also debuting this weekend is the Miami Design District Concours, a day-long exhibition on Feb. 17 of more than 125 exotic and rare cars from private collections around the U.S.

All of the events are free — except for the watches. You have to pay for those.

Robins said he intentionally chose the President’s Day holiday to capitalize on the out-of-towners who will flood Miami for the Miami International Boat Show and the Miami Yacht Show, which are also going down this weekend.

But he hopes these events will lure locals who think of the Design District primarily as a place to drop thousands of dollars on a Louis Vuitton purse. He wants you to know you can also see original works by Andy Warhol and Roy Lichtenstein for free, grab a sandwich or burrito at the casual OTL cafe or enjoy a cone of soft serve ice cream made by one of Miami’s best-known pastry chefs.

A different kind of retail

Critics and competitors say the District falls short of fulfilling its potential as a retail center. Currently, the District is home to more than 80 stores and boutiques and 70 home design showrooms. But that traditional market of brisk sales — the sight of patrons clutching stacks of shopping bags as they stroll the streets — is relatively rare.

That’s unusual for Miami-Dade’s retail scene, which is one of the strongest in the U.S. Overall 2016 sales hit $55 billion, according to the Fall 2017 Miami Retail report by Cushman & Wakefield. The nation’s top-grossing mall, Bal Harbour Shops, raked in sales of $3,185 per square foot, according to a 2016 ranking conducted by research firm Green Street Advisors — despite fierce competition that led some famous retailers to leave Bal Harbour in favor of the Design District.

But some experts say it’s simply too soon to judge the Design District’s growth, because the area is still a work in progress. Due to arrive over the next six months are four new restaurants by culinary stars Brad Kilgore, Joël Robuchon and Jean-Georges Vongerichten. So is a large food hall, St. Roch Market, featuring 12 eateries. Dolce & Gabbana, Balenciaga and Céline stores are on the way. A film-and-music superstar is said to be considering launching his own restaurant there.

“The making of a neighborhood is a process: It doesn’t happen overnight,” said Tony Cho, founder and CEO of Metro 1, whose office is based in nearby Edgewater. “You can’t expect to see a lot of foot traffic while the place is still under construction. The Design District is a multi-year, multi-phase project. Craig is doing all the right things by doing events like this and keeping the parking costs low.”

An analysis published this week by Fung Global Retail & Technology cited leisure shopping — stores surrounded by restaurants, entertainment venues and service businesses — as one of the biggest potential growth areas for the retail industry. That would give the Design District’s locale a distinct advantage over traditional malls.

“I love seeing what happens to a neighborhood if it's truly a creative laboratory and not just a commercial mall,” Robins said. “People who come here see what they're experiencing is unique. This is not the kind of thing that can be experienced in a mall. This can only happen in a real urban environment.”

Despite the work-in-progress construction schedule that has been ongoing for the last decade, the District’s improvement has helped elevate property values in nearby areas. The median price of single-family homes in the 33137 zip code — which includes Buena Vista, the residential neighborhood directly north and east of the District — more than doubled from 2012 to 2017, shooting up 136 percent from $248,438 to $587,450, according to Property Shark.

Stephen Rutchik, executive vice president with Colliers International, hopes the District will also help lure tenants to the nearby Gateway at Wynwood, home to 200,000 square feet of office space at North Miami Avenue and Northwest 29th Street that is slated to open in 2019.

“Any one of these three districts by itself — Wynwood, Midtown or the Design District — would not support this much office space,” Rutchik said. “It’s the critical mass that comes from these three neighborhoods combined that is making tenants look beyond the urban core. The Design District has reached its tipping point: It has helped to elevate the foundation of Miami.”

Within the District, sales are heading in the right direction, said Robins. Although individual stores don’t share revenues, Robins said more than a dozen retailers reported a year-over-year increase of 50-100 percent in sales in January 2018. The number of vehicles that parked inside the City View garage (which is intentionally priced low, at $3 for four hours, to encourage visitors) has gone up 50 percent every month since June 2017 (with the exception of September, due to Hurricane Irma). Ellen Salpeter, director of the Institute of Contemporary Art, Miami, said the museum has drawn 30,000 visitors since opening its doors in December.

And even though the giant Hermès flagship (one of only three in the U.S.) sometimes looks lonely, these international brands are playing a longer endgame than traditional retail. They have the resources — and the intent — to wait until the District is fully realized. By then, they will already be occupying prime locations and enjoying maximum exposure.

Hermès CEO Robert Chavez said a flagship store in Miami “allows us to express the brand in a very special and unique way. We love to be ‘pioneers’ in new locations, and we partnered with Craig because of his vision. We are able to expand our assortment and offerings to our clients with more space, and also able to offer a more special shopping experience with greater comfort and amenities.”

Chavez also said their sales at the 13,000-square-foot Design District location are 40 percent higher than they were during their last year at their previous 4,300-square-foot boutique at the Bal Harbour Shops, which closed in 2012.

“These flagship stores are built in order to expose the brand,” said Michael Comras, president and CEO of The Comras Company of Florida, a real estate developer focusing on retail who has no financial interest in the District. “They’re almost like museums for the companies. A department store cannot possibly carry all the breadth and depth of products from Hermès or Louis Vuitton.

“It’s easy to throw darts at something that’s not fully baked. There’s still much more to come. The retailers are not judging their sales volume today.”

Robins began his real estate career with a $20,000 investment with the late developer Tony Goldman in 1986. They used the money to acquire a stake in two buildings on Fifth Street in then-sleepy South Beach. But before the revitalization of South Beach was even completed, Robins was already moving on to his next projects, on the site of Miami Beach’s former St. Francis Hospital, and in the Design District.

“Back then, there were mostly furniture stores there,” said Brian L. Bilzin, a founding partner of the law firm Bilzin Sumberg who has represented Dacra in various development projects. “It was always his vision to turn the Design District into a community and a destination.”

He’s had help. Today, Dacra shares ownership of 70 percent of the Design District with an investment unit of the French goods maker LVMH and General Growth Properties, the U.S. firm that also owns Bayside Marketplace and Shops at Merrick Park. The remaining 30 percent of the District is owned by an assortment of investors. Robins oversees its day-to-day operations.

The Design District’s emphasis on culture and entertainment is already reaping unexpected benefits. Filmmaker Harmony Korine (“Spring Breakers”) is editing his shot-in-Miami comedy “The Beach Bum,” starring Matthew McConaughey and Zac Efron, in a studio space in the Design District. He has also agreed to collaborate with Nayib Estefan, founder of the Secret Celluloid Society, on a retrospective festival at the Nite Owl Theater.

“Craig has made the Design District a really interesting and creative place — a lot of different worlds colliding,” Korine said during a recent break in editing. “I like the vibe here, the way it looks and feels. It’s kind of a creative playground. There’s artwork and coffee shops and clothes.”

There’s more to come, including two hotels due to be completed in 2020. A residential development is probably inevitable.

For now, though, Robins is focused on this weekend.

“This is a big moment for us. We’ve just opened the second half of the neighborhood and everything is coming together. We already have the best art fair and the best design show in the United States. I’d love for us to have the best watch and jewelry show, too. I’m optimistic and passionate about it, but we’ll see if it lives up to its potential.”